Arriving at the LSE’s Saw Swee Hock Centre, it was like a journey to the past. Battling through the maze of a campus and walking through a packed student bar, this wasn’t my usual theatre hunting ground. Staying true and positive to the unexpected student vibes, it was a cool space to watch fresh writing – We Ruined Each Other. 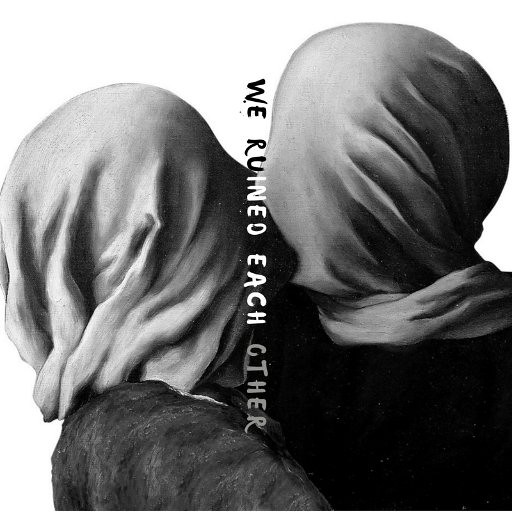 To ruin the story for you, We Ruined Each Other is based upon a young couple, Cesar and Lis, who drive their psychiatrist, Dr Hastings, mad with their complicated love story. Despite their lovers’ tiffs and Romeo and Juliet dramas, the nosey psychiatrist becomes obsessed on the foundations of their relationship, grows frustrated with their long lost love and tangled in guilt of Lis’ suicide. After Dr Hastings is carted away, Lis predictably fakes her death. With Lis celebrating her success, she and Cesar continue to play their game and prey on those who take leaps of sudden faith.

Drenched in red light, Dr Hastings dressed in a white hospital gown begins the play with a glimpse of its future. A woman driven into madness and pushed from person to person, in a battle scream for sanity. This snippet punched a powerful introduction into the darkness.

Despite the inserts of many cheesy pop songs (cue Ed Sheeran), We Ruined Each Other exposes the actions and consequences behind a failed relationship. The imbalance of a young couple’s unity highlights the weaknesses experienced by both genders.

As a gentle giant, Cesar (Jon-Rhys Foster) trembles and voices his heartbreak to a bored Dr Hastings. Describing his vulnerability and lack of self-worth, he’s ashamed of his fragility towards Lis, who wears the trousers in the relationship. Mentally teased by Lis, Cesar finally throws some serious shade by his violent outbursts. Sending chairs flying, a different side is exposed and the truth wakes up Dr Hastings.

Followed with a firm handshake, Lis (Anastasia Broder) has a sasha fierce response towards her confidential discussions with Dr Hastings. With her quirky outfits and grungy boots (which I loved!), she introduces flashbacks of her hostile relationship with Cesar. Inventing her story to keep Dr Hastings’ boredom at bay, she gives reality stars a run for their money. Like a constant “he loves me…he loves me not”, she continues to drag her suffering and overload her dire relationship onto Dr Hastings.

Unsure whether to laugh or frown at Leo, Hélène Dupré played Lis’ ex-boyfriend with a hilarious French swag and a beanie hat to hide her long locks. Questioned by Dr Hastings, she adopted a young boy’s attitude and vamped the jokey mannerisms to earn more laughs. Although this destroyed the seriousness of it all, it was a much needed comedy relief from the constant battering of Dr Hasting’s investigation.

Clicking her heels and revealing long legs, Dr Hastings (Syan Day-Evans) has a controversial outlook on her profession as a psychiatrist. Ignoring objectivity and confidentiality, she clutches on her Starbucks cup, notebook and mobile phone to understand why both Cesar and Lis are using her as a soundboard. Believing she has a strong minded exterior, it is Dr Hastings who falls under their spell and is driven into despair from their bad romance.

During the performance, the cast had a few line trips and the scene changes were a little messy, but all recovered well. Some fluffs were luckily disguised as believable chat as they were forced to deliver some chunky wordy pieces. Personally, the play could be edited as every chair turn and light fade dragged the play kicking and screaming for its ending.

We Ruined Each Other is a dark twisted long piece, frustrated by Cesar and Lis’ cat and mouse tactics. Failing to understand why Dr Hastings is so involved, the play becomes besotted with itself. However, the play is a promising start for Laura Blagoev’s writing career as her strengths lie in the construction of building complex relationships and dramatic character development. It was a decent solid step into the making of theatre.

Big thanks to Lara Levet.