Warning: Due to the nature of the production, this post contains “filthy language and immoral behaviour”. I will ask for forgiveness at a later date.

How would I describe the National Theatre without sounding soppy? Well, I guess my actions speak louder than words…. 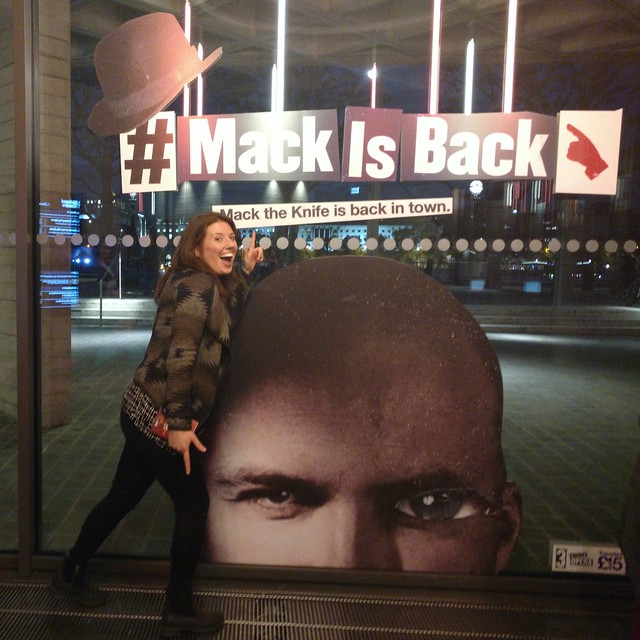 Emma is Forward and Mack is Back. I returned to my home sweet home. With flashbacks to 2011, the National Theatre inspired me to start my theatre journey so the invitation to watch The Threepenny Opera with fellow theatre bloggers made my smile cheesier.

London scrubs up for the coronation. The thieves are on the make, the whores on the pull, the police cutting deals to keep it all out of sight.

Mr and Mrs Peachum are looking forward to a bumper day in the beggary business, but their daughter didn’t come home last night.

Mack the Knife is back in town.

With a slap and tickle, the plentiful boobies of dark comedy bounce and the nipple tassles twist the drama and thrust it into your face. You simply need to decide whether you will spit or swallow the National Theatre’s juice.

A landmark of twentieth century musical theatre, The Threepenny Opera comes to the National Theatre in a bold new production.

The original German text is based on Elisabeth Hauptmann’s German translation of John Gay’s The Beggar’s Opera.

Fighting out of a paper bag, Vicki Mortimer wrapped the skeletons of stage flats in brown gift wrap and delivered East London with an expressive delivery service. Signing his address with a knife, the blade rips through Macheath’s sinister silhouette and creates a new entrance and exit route.

Thanks to the Olivier Theatre’s turntable stage, the stripped back to basics set design constantly revolves and gives the cast and musicians pace and space to perform with slick comical and dramatic value. Abusing the abilities of a staged playground, the set falls on top of Macheath framing him for Betty’s murder (can’t imagine the risk assessment forms on this!)

Freeze framing, walking, stumbling and strutting, the cast are paraded like a bunch of deprived freaks, labelled to peddle vice. Embodying his inner Fagin, Jonathan Jeremiah Peachum (Nick Holder) is the show’s comedy genius. Loud and proud, he has his fingers in everybody’s pies and likes to stir trouble. Wearing kitten heels (better than me!), he is the leader of down and out gang. Just don’t mess around with his daughter, Polly… too late, already happened.

Strutting around in their latex red kinky high boots, there’s a bitchy playoff between Macheath’s wife, Polly Peachum, and his mistress, Lucy Brown. The ping pong verbal diarrhoea begins and it’s all suddenly silly and predictable, but watching Macheath crack under the impossible task to regain dominance over his women earned a snigger.

At times, The Threepenny Opera walked the dangerous tightrope of misogyny, especially when Macheath bashes Betty’s head through paper and rapes her from behind. Venting his frustration, he takes it out on the women and it becomes a hard watch. Silence stones the laughter and Macheath is weirdly reborn as a victorious villain.

Singing from a different hymn sheet on the stairway to the gallows, insert seriousness and inject sympathy into The Threepenny Opera’s bloodstream. Betrayed by Chief Inspector ‘Tiger’, Macheath accepts his fate and pleads for understanding from us, the public. With a gigantic English flag as the backdrop, we are left to lie back and think of England as he drops…or does he? Well, God Save the King!

The Threepenny Opera was three hours of loveable insanity. If theatre could make love to you, The Threepenny Opera is the lovechild. Stabbing modernity, slicing melodies and hanging creativity, Rufus Norris is certainly leading the National Theatre down a new, young and exciting path. He knows how to hit the spot. I’m weak at the knees. *Burp*

Big thanks to London Theatre Bloggers and the National Theatre
Book your tickets to see The Threepenny Opera, click here

3 thoughts on “Penny For Your Thoughts”