Burrowing into The Warren, I headbutted a red shipping container called the Theatre Box. I had arrived at my destination. Previously shown at Etcetera Theatre in January, I was gutted to miss Cuts and Grazes’ Sex and God, but I had a theatre guardian angel on my side. Hallelujah! Amen! 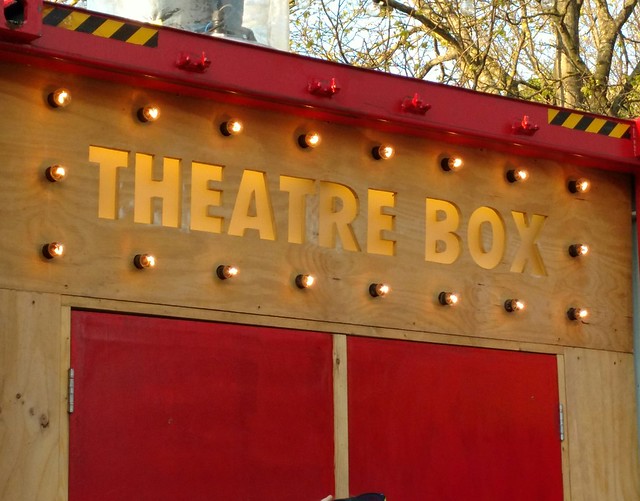 Being a sunny day in Brighton and a drink in hand, I hopped into the box with my famous buck teeth smile, awaiting for some theatre magic. Before I make this blog post sound like Watership Down, I wondered where this play was heading – “Sex” and “God” – cue Jessica Rabbit costume.

Dripping with sweat from the Theatre Box’s heat, Sex and God wrung the four women and bled their words dry. There was no sign of holy water to baptise their sins, just the Theatre Box acting as their confession booth. The spotlights pierced their souls to the spot, pleading for their lives. Two by two, they hid in the shadows, rolled up their sleeves and turned their distraught faces in sync.

Stumbling, interrupting, overlapping and continuing, Linda McLean’s script was designed as a constant stream of conscious struggle. Faces etched with pain and torture, The Warren’s happy sunshine vibes were soon forgotten. With hardly any breaks from their battering, Sex and God mentally exhausted you.

Cuts and Grazes theatre company creates ambitious contemporary work about social issues in the past, present and future.

Tonje Wik Olaussen’s direction provided the monologues to become hardcore outbursts, strangely therapeutic towards female solidarity. The incense of faith, lust and family stunk their thoughts and they were forced to kneel at the imaginary altar of obedience. Their faceless fellas screwing them over, mentally and physically, creating some upsetting and disturbing scenes of abuse. Like time travellers wives, these women were bound by their families, religion and ambition within their generation.

Jane (Ailis Duff), a kitchen maid, the first in her family to move to the big city for work; Lizzie (Anna Carfora), passionate but unskilled and permanently dodging poverty; Sally (Eva O’Connor), an early school-leaver who tries to escape a dangerous relationship by working her way into a profession; and Fiona (Anne Bertreau), first in her family to go to University and discover the world of bewildering choices.

Eva O’Connor had the Jessie J look about her and gives her Sally a “do it like a dude” attitude. She was a fierce actress, fired her words out with compassion and hypnotised the audience with a forbidden stare. Strangling herself for the imaginary effect of her partner’s tightening hands, she slid her body across the floor and between the stools to execute her rape scene. 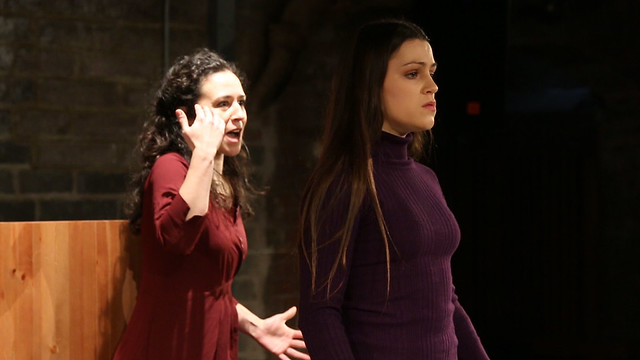 Anne Bertreau tones down her rebellious ways and hits the books. With the determination to study hard and reward will come, her belief in education grants some magical dust called happiness. It’s the chasing of fear which bites the reality of this young woman’s pride and achievement. She bares the cross of the glass ceiling.

Ailis Duff plays Jane with a matter of fact tone alongside priceless facial expressions. Unsure of herself in her white apron, Jane abides by the rules of work and religion. From the sad olden days generation, she knows her place and dares to step out of her shell. Scrubbing the floors and helping her husband pull a sickie, she hangs from the ties of ‘happy’ domesticity.

Anna Carfora is the lady in the red dress, desperately trying to find safety for her family. She’s the master of raw emotion and pleads through her eyes and fallen body. Echoing many current refugee tales, Lizzie’s struggle is very real and passionate. Her poverty in health and location brings no home sweet home, but the pure frantic sadness guards her door.

The set design was stripped of its riches and performed against black walls. They were trapped in hell’s deep ditch, running from left to right and collapsing to gain breath. Sitting on the white stools as props, the women formed the girl band and echoed their sad tunes. 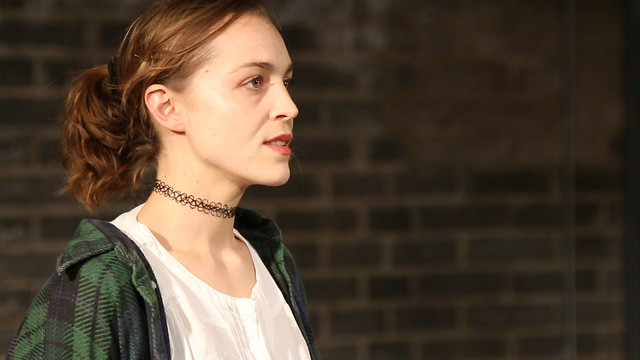 “God” was loosely mentioned with not much of a controversial tongue whereas “Sex”…well..was praised like a good morning hymn. Governed by the expectation to conceive, the women struggled, collapsed and painted this horrific agony of childbirth. Becoming like midwives in crisis, this made me cross my legs rather tightly and cutting off all blood circulation.

Leaving The Warren’s Theatre Box, my heart was cut, grazed and wept. Sex and God had a powerful punch into the holy book of fringe theatre and muttered a short prayer for feminism. Cuts and Grazes will bruise your soul so make sure you take some cartoon plasters and get Mummy to kiss it better.

Big thanks to Tonje Wik Olaussen